New revolutionary phone app that is only Unique to Ramon Inc.

We developed a state of the art phone app so anyone can get their shipments covered at a moment notice at a click of a button. 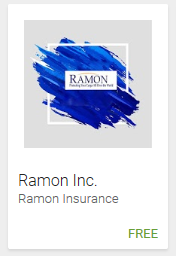 Our freight insurance phone app is the most user friendly application that will save you TIME & MONEY.

Since 1982 we have been the pioneer in Freight Insurance Technology. From online insurance certificates that client log in from anywhere in the world to our new phone app that is compatible to all phones.

Check us out here: https://play.google.com/store/apps/details?id=com.bd4390a32e1d

Get Your Quick Quote In Seconds. Download the APP NOW.

Cargo insurance, covers any possible risk from physical external cause to the goods while in transit. Should your claim for the loss or damage be denied by the shipping carrier, the all-risk cargo insurance for full replacement value will always protect your goods for the full declared value. To protect against these claims, freight brokers carry contingent cargo insurance to pay the claims that the carrier will not.

Shippers may hold freight brokers — who negotiate transportation contracts on behalf of shippers — liable should cargo be lost or damaged in transit. To guard against this potential, freight brokers carry contingent cargo insurance to insure them against claims made by the shippers for damage to cargo. Contingent cargo insurance only comes into play when the carrier refuses to honor a claim.

Have we reached a point in which cargo insurance will be needed for outer space? Not yet, but it’s not as far fetched as we might think. As NASA conducts more studies on the human body in space for the future missions to the planet Mars, the more we learn how humanity might be able to sustain life on another planet.

Imagine the huge migration of humans to other planets and all the commodities that will needing insurance. With each person with their own space vehicle, even car insurance companies would need to widen their insurance policies and transportation coverages to include all the advance technology that will be available to each individual heading to space.

The founder of Tesla, Elon Musk, is also the founder of Space Exploration Technologies (SpaceX). SpaceX’s mission is to enable humans to become a multi-planet species by starting a self-sustaining city on the planet Mars. In 2008, Falcon 1 became the first privately developed liquid-fuel launch vehicle to orbit the Earth. After this success, SpaceX closed contracts with NASA to carry cargo and crew to the International Space Station (ISS). (ISS is a space station that is a habitable artificial satellite within low Earth orbit.) SpaceX is rapidly reducing the cost to access space to making Mars more of a reality to everyone within our lifetime.

Therefore, as SpaceX and NASA continue their work, cargo insurance companies should start working on the demands the freight insurance world will soon be facing.

In 1933, Congress designated on May 22 to be Maritime Day to honor U.S. merchant mariners and the maritime industry. The marine industry is so important to the U.S. economy that it contributes more than $36 billion dollars per year and provides more than a million jobs.

The ocean industry transports all types of commodities which by value composes 53% and 38% of U.S. imports and exports which is the largest share of any mode of transportation. The top exported and imported commodities is fuel and oil that accounts for 22% of trade cargo in terms of vessel value. Meanwhile, the top import and export maritime trading partners are China, Japan, Germany, Mexico, Brazil, Saudi Arabia, and South Korea.

Marine transportation system serves as a critical component of national public transportation with ferry operations and cruise ships. The cruise industry alone contributed about $37.8 billion to the U.S. economy in 2010. Recreational boating contributed $30.4 billion in 2010 to the economy with Florida as the number one state with recreational boat registrations. 2.8 million people in 2010 were employed by the ocean economy producing $258 billion worth of goods and services. According to the NOEP, the marine world contributed roughly 4.4 percent of the total U.S GDP.

From tourism to business, the marine world is a crucial part of the U.S. economy.

Let’s travel back in time to Ancient Greece in 6th century BC where the history of the rail transportation began. During this time the system was simple but effective. There were paved track ways which transported boats throughout the region. The track way was 6 to 8.5 km long. These paved track ways were used for over 650 years.

Later in 1515, Cardinal Matthaus Lang wrote about a wooden rail with rope which was operated by human or animal power. And as time progressed so did the idea of the rail system, by the 1760s idea of fixed plates of cast iron to wooden rails had been implemented. And by 1764 in Lewiston, New York, the very first railway was built which launched the rail industry.

The U.S. freight rail network is the most dynamic freight system in the world. The rail industry is a $60 billion industry that consists of 140,000 rail miles. The 140,000-mile system moves more freight than any other freight rail system worldwide. It provides more than 221,000 jobs throughout the country.

Although other options for transport freight have risen throughout the years, the rail industry accounts for over 40% of the U.S. freight and 16% tons of moved freight weight. Almost anything can be shipped by rail. 91% of rail freight consist of bulk commodities such as agriculture, construction materials, etc. The other 9% of commodities consist of consumer goods and other miscellaneous products.

And as more time passes, the more crucial becomes the role of the rail industry for the future. Although population and demographic trends pose an enormous challenge for the U.S. transportation infrastructure, measures are being taken and projects are being planned to expand the transportation infrastructure without diminishing the quality of life.